Jenn Fleming’s inspiring comeback from a torn labrum continued last Saturday when she won the Holiday Lake 50K in her first ultra-marathon (or even marathon). 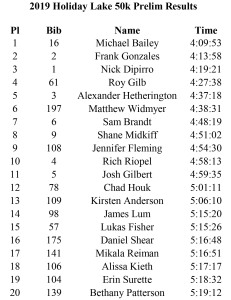 Phone were buzzing around Blacksburg as the news spread among the NRV running community that the Virginia Tech senior, who grew up and went to high school in Blacksburg, finished as the top woman.

Jenn covered the sloppy, muddy course near Appomattox in 4:54:30 – a performance that placed her ninth overall and more than 11 minutes ahead of the second-place female finisher.

“It was such a great experience. It’s easily the hardest thing I’ve ever done,” Jenn said. “I feel so supported and uplifted by this incredible community that gets as excited as I do when I accomplish my goals.”

18 months ago Jenn Fleming didn’t know if she would run again. Check out her comeback story

Jennifer Fleming had a great running year in 2018.

She ran her first half marathon in 1:21:40 – crushing her goal pace by more than 15 second per mile. And she dominated the Runabout Sports Race Series – finishing as the top woman in every race she entered and easily winning the overall race series championship.

Hard to believe that 18 months ago, she didn’t know if she would ever run again.

Jenn has logged fast times and impressive results since she started competing in middle school.

In high school, she helped Blacksburg High win state team championships in cross country for four straight years and made two trips to Nike Cross Nationals where the Bruins earned a seventh-place finish in 2015 against the top teams in the country. On the track, she earned multiple state individual titles and was part of a Blacksburg team that won the 4 x 1-mile relay at Indoor Nationals in New York.

Her hard work, as a runner and in the classroom, helped Jenn earn a scholarship to run for her hometown Hokies. She headed to campus ready to major in mechanical engineering, train hard and run faster.

She had early success as a Hokie runner but it all came crashing down during the 2017 outdoor track season when she tore cartilage in her right hip labrum. Like every runner, Jenn had experienced and treated many injuries – but this one was different.

“With other injuries, there was always a clear path of recovery to take to get back to running at full capacity,” she said.

Not this time. There were treatment options, for sure, but the results weren’t guaranteed.

She wasn’t sure she would ever run again.

“I was at a loss. The doctors did their best to answer my questions, but everything was so uncertain. Will surgery fix it? I don’t know. Can I run fast again? I don’t know. How about far? I don’t know. I was devastated.”

She was also determined to fix her hip, recover and run again — but she knew continuing to race collegiately could have long term impacts and wasn’t wise.

Her coach offered the option of a “medical disqualification” – allowing her to keep her scholarship and other benefits of varsity athletes (access to trainers and doctors, etc) with one huge difference. She could no longer race as a Hokie.

“I wouldn’t be able to compete in a VT singlet anymore,” she said. “Honestly, it was one of the hardest decisions I’ve ever made. I love challenging myself in a highly competitive running environment so much. I love toeing the line with my teammates and giving it all I’ve got for them. I love the comradery that comes with that kind of dedication. But I love running itself the most, and I couldn’t chance losing that all together.”

With patience and determination, Jenn not only recovered, she discovered a new passion — Triathlon – a sport she now competes in as a member of the Virginia Tech triathlon team. Most satisfying running accomplishment? Probably my first (and only, so far) half marathon I just competed in this past November. About a year and a half ago, I wasn’t sure if I would ever be able to run again, let alone 13.1 miles, and definitely not fast! But I gave it a shot, had a blast the whole time, and ran about 15 seconds per mile faster than my dream goal pace to run a 1:21:40. I hope to run many more!

Proudest race moment? In high school, my proudest race moment was definitely when my team won the 4xmile relay at Indoor Nationals. Emily Beatty raced so tough and brave through a broken foot (unknown at the time), Claire Ewing-Nelson and I tied our personal bests, and Bonnie Angermeier had a huge PR anchor leg to get the victory – everything came together so perfectly.

In college, I would have to say my proudest moment was what ended up being my last race in the VT singlet – the 5k at Tennessee in my sophomore outdoor track season. There were about seven of us racing, all in one big pack, feeling really good and running really fast! As each of us finished, we kept turning around to hug our teammates who finished right behind us, until we were just a big sweaty, happy pile of VT runners. We all ended up getting personal bests – coach was so proud of us, and we were so proud of each other.

Who/what inspires and/or motivates you? I am constantly being inspired and motivated by the incredible, loving people in my life. My friends, my family, my God-given love of running, people who have persevered through injuries or other hardships (especially people who have bigger problems than me), adults who have been running for many years, and people who have only just found a love for running.

Favorite running route in the area? Pandapas Pond is by far my favorite place I have ever run; I’m always down for the Poverty Creek trail, but I love to challenge myself on Beauty or Snake Root as well. The fire road is awesome too if I just want to cruise and go fast without worrying about tripping on roots.

What helped you recover and how did you discover the Virginia Tech Triathlon team?

Since I have a MedDQ, I still have access to physical therapy in the training room at VT, so for the entire summer of 2017, I was in there almost every day, doing exercises to strengthen all of the muscles around my hip. I also did the summer swim team at our local pool that summer (after taking a break for 7 years!), and I got to borrow JB Brown’s elliptigo – basically a stand-up bicycle. My dad encouraged me to buy a road bike – he was really into cycling back in college, and he wanted there to be something else for me that I could do to stay active, in case I was never able to get back into running as much as I wanted to. So I started biking, albeit begrudgingly, and I was very surprised to find that I totally fell in love with it. I never thought I could love a sport even close to as much as I love running, but cycling got pretty dang close. I started riding with my friends Jacob Reynolds and Abby Reilly, the latter of whom was training for a triathlon at the end of the summer. Triathlon has always intrigued me, and I had wanted to try one for years, but never did due to lack of time or fear of injury. I had started running a bit at this point and the Reilly’s convinced me to accompany them and give it a try. It was only a Sprint (750 m swim, 16 mile bike, 5k run), but I was completely spent at the end. But also hungry for more. I came out to the first club meeting of the VT Triathlon Team and immediately fell in love with everyone! I have been working out, racing, and just hanging out with them ever since, and I could not be happier.

What are your race goals for 2019 – either running or triathlon? I would love more than anything to run an ultramarathon, and hopefully many more after that! I have my eyes set on the Holiday Lake 50k coming up February 2019 – it would be a dream come true to get to race that! I’ve been slowly ramping up my mileage with no issues, so I’m very hopeful. As far as triathlon, I would love to compete in a Half Ironman, potentially in Chattanooga, TN at the end of May (1.2 mile swim, 56 mile bike, 13.1 mile run). Eventually, I would like to do a full Ironman.

Which leg of the triathlon is your favorite? The run, of course 😊 It’s fun for me in the races because I am worst at the swim, better at the bike, and best at the run, so I am improving throughout the race!

Any racing superstitions or rituals? I don’t know if this counts, but I always eat a pack of chocolate Belvita Breakfast Biscuits before all of my races.

Trails or roads? Trails all the way! I love the quiet serenity of the woods, being out of the way of the hustle and bustle of world. The technical trails are really cool and challenging to navigate, and it’s fun to get a little muddy every once in a while! The soft surfaces are a great plus too for injury prevention.

Advice for young runners? Be patient and never lose heart. Running has a lot of ups and downs (haha) – listen to your body and learn to know when you’re pushing too hard. Don’t let running become a chore either. Try to always find the positive and never lose sight of why you love running!

Running fast and up front at age 57 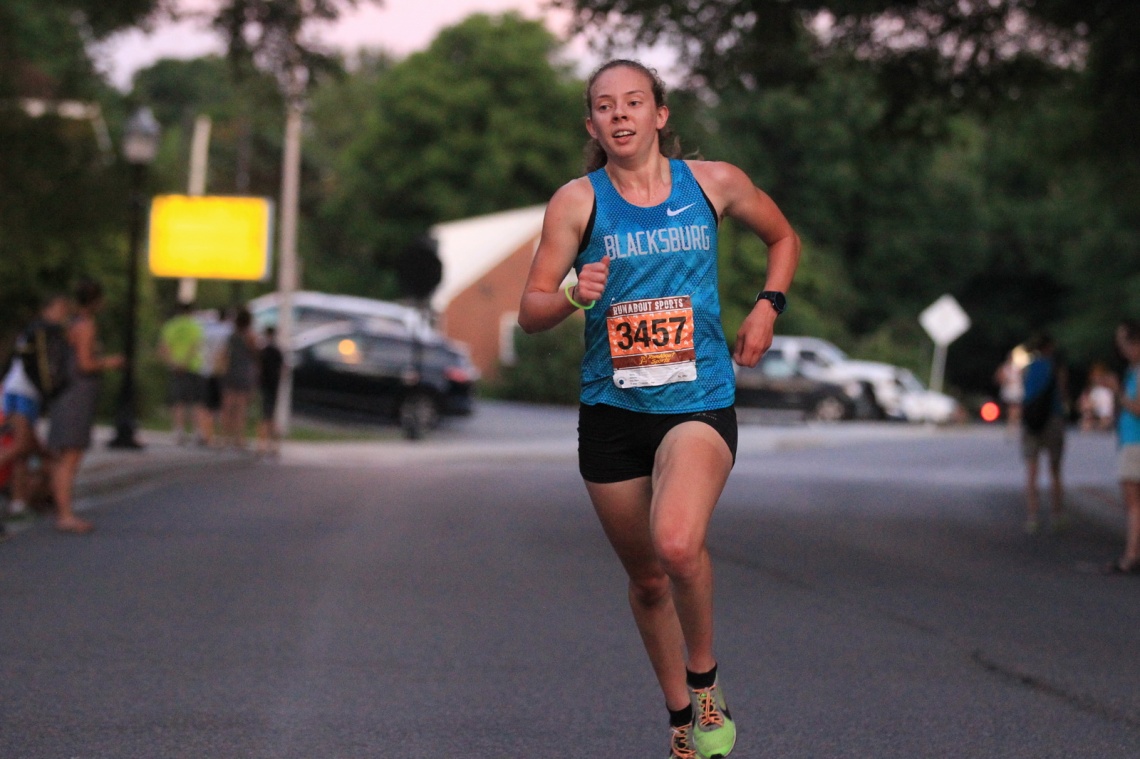 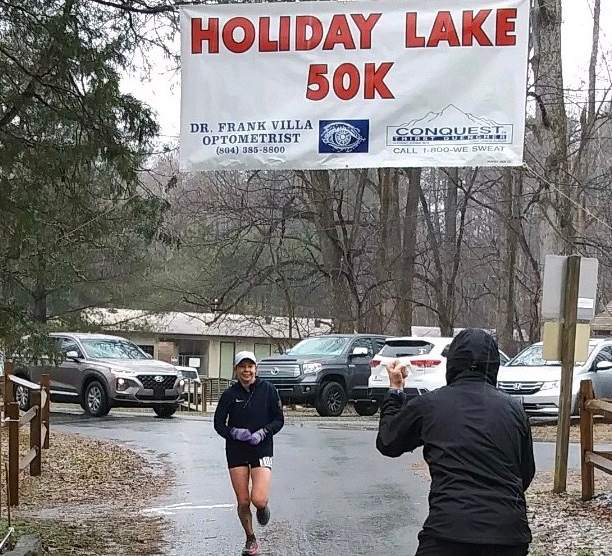