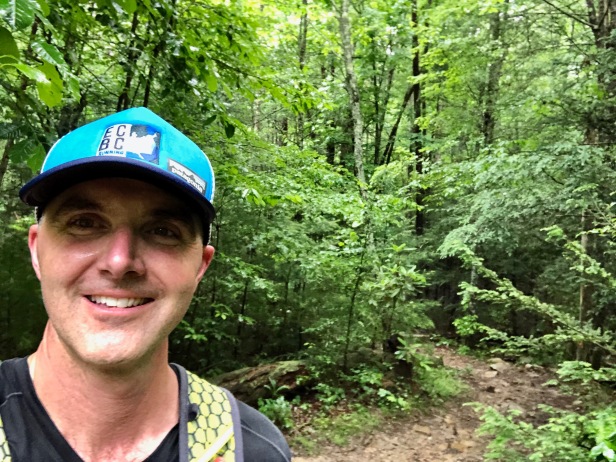 A year ago, Blacksburg’s Skip Slocum was a sporadic runner – someone who would occasionally run for a few weeks to jump into a 5K – and then stop.

This weekend, he will compete in his first ultramarathon, the Rock Creek Stump Jump 50K in Chattanooga, Tennessee, capping a year of consistent training that’s helped him lose weight, improve his fitness and transform into a runner who has completed the Blacksburg Classic 10-miler, two 25K trail races and many more to come.

So, what made the difference this time?

“I really credit plugging into this awesome running community as being the difference maker in my running actually sticking,” said Skip. “There are few things I enjoy more than getting out on the trails with folks. There’s no question that without this community the upcoming race would never have been a consideration.”

Skip first got involved in the Blacksburg running scene several years ago as a financial sponsor of the RunAbout Sports Race Series.

“I connected with James DeMarco to become a sponsor and help support the Blacksburg High cross country team, but still never really engaged in the running community as much as I’d hoped until about this time last year. I randomly went to a pub run and ran into Erik Olsen, who I’d known for awhile. He was incredibly welcoming and invited me to the Blacksburg Striders’ Monday night and Saturday runs as well.”

“It will be a new distance and elevation PR for me,” he said. “Super excited!”

What led you to Blacksburg? I moved to the area from Jackson, NH, when my college roommate from Central Michigan convinced me to come down for a summer job at Wilderness Adventure in 1998.  The plan was just that … come for the summer then move back to New Hampshire and continue working for the Appalachian Mountain Club at Pinkham Notch. I went back to New Hampshire for fall/winter but decided to come back to Wilderness Adventure in the spring of ’99 and have been here ever since.

When did you start running? Which time? I was a high school runner and started when my junior high (yes, it was “junior high” then) wrestling coach encouraged me to run track to stay in shape for wrestling. Track turned me on to XC and I never went back to wrestling.

But you have really increased your training in the past year? It was about this time last year that I ran for a few weeks leading up to the Brush Mountain Breakdown 5K, maybe including a few RunAbout Wednesday night pub runs. Before that I hadn’t done anything more than running for a few weeks/months prepping for other random 5Ks – maybe averaging one every other year or so.  After Brush Mountain, I decided to work up to being able to run 10 miles for the Blacksburg Classic.  After checking that box, I moved on to the Gateway 25K last May. Over the summer, a friend told me I should join them for the Rock Creek Stump Jump 50K.

Favorite distance to race? I haven’t done many so I’m still figuring it out…. I have a lot more to try! I really enjoyed the 25Ks I ran this year – Gateway and Conquer the Cove.

Favorite training run or workout? I absolutely LOVE my Saturday morning trail runs… especially when other runners introduce me to new trails/areas – thanks Erik Olson, Brett Sherfy, Michael Stowe and Jordan Chang!  Looking forward to many more adventures ahead!

Who inspires you? First and foremost, my wife Stephanie! She’s the most kind-hearted, loving soul I know and I’m blessed to walk through this life with her. She understands and appreciates my need for getting outside and experiencing new things/places. I’m so excited that she’ll be making the trip with me to Chattanooga, along with my youngest daughter, McKenna.

Any funny training or racing stories to share? Many folks have heard about my accidental Hokie Half.  In 2016 I signed up for the 5K (yes, another round of running for a few weeks leading up to a 5K). I asked  one of the volunteers what time the 5k started and they accidentally gave me the starting time of the 1/2 marathon. I soon realized I was in the wrong race when no one was turning left at the 5K sign. I was thinking “I feel too stupid to turn around and go back” but wasn’t sure what the best fix was. I had no idea what the course was like for the 1/2 but knew that it connected to the Huckleberry so I figured when we crossed the bridge we would drop down by the hospital and connect, then maybe I would just run home?  Wrong.  “Crap – they’re going to Merrimac??”  Wrong again … onward to the mall.  Not sure it was the wisest decision but I decided to just keep going and see what happened. A little while later I finished my first 1/2 marathon having not run more than 5 or 6 miles at a time in the weeks leading up to it. The best part was my time showed up in the 5K results. Worst part was I could hardly walk the next day. Proud to report that my 5K time has dropped substantially.

Worst injury? Fortunately, I haven’t had many. I did have a minor setback a little over a month ago when I wiped out on the least technical section of the AT from Route 42 in Newport to Wind Rock.  I picked the nice flat section near Kelly’s Knob to take a spill.

Advice for new runners? Go to the group runs!  It’s such a welcoming group of great folks… makes you want to keep going!

Fact many people don’t know about you? My name is not really Skip? I play the banjo?

Favorite place to celebrate with a beer? Back yard around the fire pit!

Training/racing goals? Not really a race, but I’d love to try this Catawba Runaround I keep hearing about.

Have you ever gone on a group run and not had someone ask you a real estate question?  Ha! Not very often … but I love what I do so it’s all good!

Jordan Chang shares his passion for running and community.

2 thoughts on “Skip Slocum: From occasional 5K to 50K in one year”