It’s no secret that Cortney Martin is strong. Anyone who’s competed against her in a triathlon, duathlon or running event can attest to her speed and determination.

But it may surprise some to learn that she started as a powerlifter in graduate school.

“It gave me a good foundation for running and cycling,” she says.

Cortney started running for “get-in-shape-lose-weight” reasons in her early 40s.

“I was a mom of two littles and felt like a blob,” she said. “So in 2008, I started a blog called “Un-blobbed” that began on day 1 of that journey. It was later renamed to Cort the Sport and has over 1,000 blog entries.”

“I’d like to point out I had no legitimate swim, bike, or run experience/skill prior to 2008,” she said. “You can start at ANY age and with no skills!”

She offers this advice to new runners and triathletes. 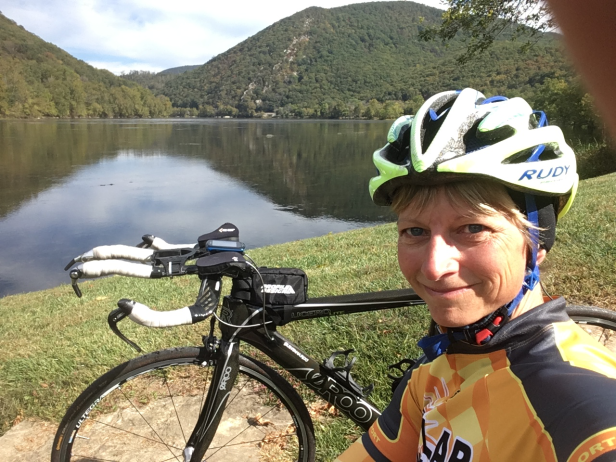 Hometown:I grew up in Upper St. Clair, PA (a suburb of Pittsburgh) but I’ve been in Blacksburg for nearly all of my adult life.

Family: Two sons, Spencer (first year at UVA) and Grant (senior at Blacksburg High School and an avid runner), plus a dog and cat.

Occupation: Engineer (PhD, ISE) but I’ve been working in endurance sports marketing since 2012.

Favorite triathlon leg? I like them all, but I am strongest on the bike. I love the speed, the cornering, and passing people.

Most satisfying running accomplishment? The 2013 Boston Marathon. I was on the start list for 2011 and 2012 but missed both due to injury which was very frustrating. When I finally got there I was really happy to hit my goal pace for most of the race and PR with a 3:33 (race report here). I haven’t done a marathon since. That’s just too far!

How do biking and swimming affect your running performance?They keep me healthy and cross-trained so that I can run well on rather low mileage (15-20 miles/week). My triathlon 5K times are similar to my stand-alone 5K times, but I prefer having the swim and bike warmup.

Proudest race moment? I’m proud when I know I’ve raced smart, strong, and tough, regardless of the outcome. But a recent proud race moment would be USAT Age Group Sprint Nationals last August. I raced the Olympic on Saturday and had a decent swim and bike but gave up mentally on the run. I was determined to redeem myself the following day in the Sprint race (a run-bike-run duathlon due to swim conditions). I ran an exceptional-for-me first run leg. Seeing my mile pace in the low six minutes for the 1.8 mile run had me so excited that the adrenalin just supercharged me through the rest of the race. I closed it out with a physically — and mentally — strong run that made me very happy! Full race report here.

Who inspires and/or motivates you? I am inspired by the community of endurance athletes and para-athletes and the countless stories of perseverance and determination. But on a personal motivational level, I have to give a huge shout-out to my coach of nearly 10 years, Jim McGehee. I love training, but I enjoy it so much more having a scaffold of structure, accountability, and near daily-feedback provided by my coach. I train, on average, only about 10 hours a week but he gets the most out of my limited time and makes it fun and interesting. He helps me to stay healthy and motivated while avoiding overtraining, which is key to longevity in the sport. And when I show up to the start of a race, I do so with the full confidence that he has prepared me well.

Trails or roads? Yes! And the track! Variety is key. While I enjoy trail running, I am not a great trail racer. I am too worried about twisting an ankle and I have a horrible sense of direction. One time at Pandapas, I ran down the wrong side of the mountain and had to hitch a ride back.

Any racing superstitions or rituals? No, but every race morning I feel very tired and lazy and I say, “I don’t feel like working hard today.” Then the air horn sounds and I go into race auto-pilot. I can’t help but race hard. I once read that you don’t have to feel good to race well and it’s true. Just let the body and mind do what you have trained them to do.

Fact many people don’t know about you? Since moving into endurance sports, I’ve been privileged to work closely with a number of top pro triathletes in a marketing/PR role. It’s been fun to have that inside view and you find out that they really are just like us with the same ups and downs…only faster. I’ve worked with amazing athletes such as Lauren Goss (Olympic and 70.3), Timothy O’Donnell (top American at Kona), Summer Cook Rappaport (ITU athlete), and Joe Maloy (2016 Olympian).

What do you enjoy most about the sport?I am grateful for the community of people, the excuse to play outside, and the opportunity to swim, bike, and run in beautiful places throughout the region and the world!