Brett Shelley set seven school records in four years of distance running for Hood College in Frederick, Maryland – but his impact on the program did not end when he graduated in 2013.

He stayed with the team as an assistant coach while pursuing a master’s degree and in 2015 he was promoted to head coach of Hood’s men’s and women’s cross country and track and field teams.

At age 24, he was directing a program that included athletes who had been his teammates. Becoming a head coach at that age was invigorating, challenging and most of all — a growth experience.

“I had actually been on the team with the senior class, and establishing respect was very difficult. It was also tough to earn the respect of colleagues and to find time for yourself,” Brett said.  “As a young coach, people don’t take you seriously (whether athletes or coaches) and you have to do a lot of internalizing to think about what’s important for athletes, yourself and the greater good. You learn to really prioritize which battles to choose and which to heed.”

And even though running dominated his life – maybe because of that reason — Brett slowly lost his passion for the sport. After two years as head coach, he knew he need a change.

“I realized coaching wasn’t my true calling. I had visited Virginia Tech for graduate school the previous year when I first graduated with my master’s degree,” he said. “Coming here has been one of the best decisions I’ve ever made.”

While he came to Blacksburg to pursue his doctorate in plant biology, Brett also rediscovered his love of running. He credits the Runabout Sports Wednesday night pub run with helping him find the community he needed and a return to competition.

He started off the 2019 racing season, with a repeat third-place finish at the Blacksburg Classic and is looking ahead to a fast marathon this fall.

Why did you start running? My mom made me run as a kid and I went out for cross country in high school after playing soccer my first two years. I fell in love, and I haven’t regretted the decision.

One big takeaway from your college running experience? My coach always had a saying, “You get out, what you put in.” It resonates with me, as you should give 100 percent to everything you do, and the harder you work the better you will like the results.

How did you get connected to the Blacksburg running community? I was out on a run one night after work when I first moved here and ran into some of the runners out for Pub Run. I hopped into the group for a little bit. I attended Pub Run the next week and found a group of runners that really made me re-fall in love with running, after I lost touch during coaching. Before I knew it, I was meeting up with a group of former collegians on Tuesday in a “half- fast” workout at the Virginia Tech track. It’s become a regular thing and now I’m participating in many of the local events.

How do you balance work/school/running? I try to run between 45-60 miles per week if I’m really in a training season. I try to run seven days a week, but that’s not always possible if things in lab do not cooperate. I usually get to the lab between 7:30-8 a.m. and work until 5 p.m. I go home and run, grab dinner and go back to lab or catch up on reading afterward. Running is a good stress relief to not think about lab for an hour or two. It’s also a great time to do some deeper thinking about life and science experiments that you might be missing in the lab environment.

How did “track tuesday” get started? I think it started prior to me arriving in Blacksburg, but it was rekindled at Pub Run when we talked about some of the local races. We now have anywhere between 3-7 people on any given night. We are always looking for new ways to improve our training and found that running in a group keeps us more accountable.

Favorite distance to race? 10-miler. It’s a unique distance. It’s challenging because it is the perfect median between distance races and the speed of the 5k/10k.

Who inspires and/or motivates you? Mentors? My favorite runner is Jenny Simpson. Her smile and positive attitude is so contagious and I love her push for clean sport.  My college coach, Brent Ayer, was probably the most influential in helping me to develop my running career and giving me opportunities to coach and meet so many amazing runners during my time working with him. But, my biggest fan is probably my mom – she was the person that signed me up for fun runs, drove all over the East Coast to watch me run in college, and calls after every one of my races to see how I did and what’s next.

Most satisfying running accomplishment? It’s probably earning All-MAC during my senior season.  In cross country, I finished 18th out of 20 to make all-conference. As I got about a half-mile from the finish, I could hear coach screaming at me that it was going to be close. I took off. I had no idea where I finished, and I was so exhausted that I just passed out in the tent. Coach came up behind me, hand on shoulder and said ‘congratulations – you did it.’ It was the biggest relief and I just started smiling and gave him a hug.

What did you enjoy most about coaching? I loved seeing the athletes I coached achieve success in ways they never thought possible. Many of the athletes that I coached are now off coaching on their own and report back successes they or their athletes are having. I think the best moments for me were when the athlete had no words but “thank you” – it’s these two simple words that go far for any coach, as the satisfaction of coaching is making others feel better about themselves. 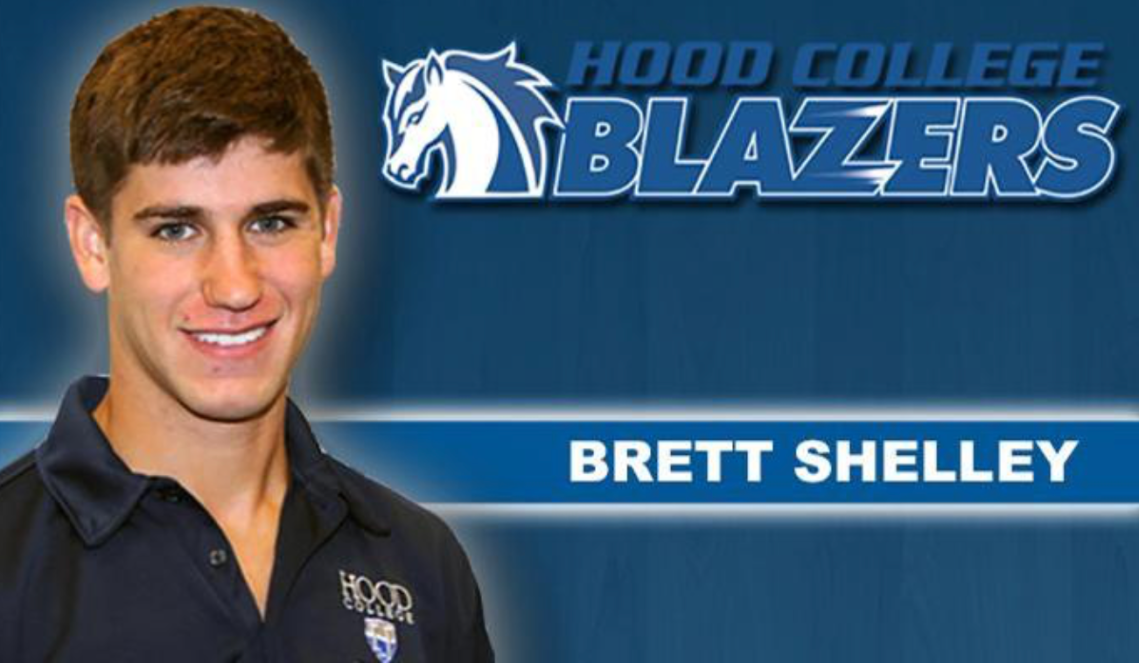 Any funny coaching stories to share? When you are coaching, you have to find ways to relate to athletes and sometimes the analogies, advice you give doesn’t exactly resonate with the athletes you coach. The kids started a group message and twitter tagline “CoachBrettLogic”. It made me think about some of the advice, but also encouraged me to come up with even more unique ways to communicate to the athletes.

Worst injury? Before my senior year I overtrained and felt my IT band tighten and it felt like a knife being stabbed into my knee. I had to take some time off and bike for a month. I was nervous to race again that fall and it took about two races before I felt back to normal. They flare up from time-to-time and really work on your psyche.

Advice for new runners? Find a group, be consistent and have fun doing it. Learn to see running as something you want to do and not something you have to do.  Listen to your body and know when to push harder, but also when to back off. Seek out more experienced runners and ask questions. Chances are we love talking about running.

Trails or roads? I like to go fast and get into rhythm when running. For me running is about consistency. I love fire roads/ rail trails — it’s a nice compromise between both and a great way to develop metrics to see improvement.

Any running superstitions or rituals? The night before a big race, I carbo load with pizza or pasta and two Nalgenes of water. While I’m warming up, I have to listen to AC/DC Thunderstruck.

Fact many people don’t know about you? I’m color blind.

Suggestions for improving our running community? Get the community involved to grow the RRCA Club and sponsor a group that represents Blacksburg at other races – beyond the local race series. I love the race series and the competition. We need to incorporate graduate students into the local running scheme.

Training/racing goals as you look ahead? I want to run another marathon this fall. I just missed my BQ when I ran it the first time. I want to run 2:45.

Running fast and up front at age 57 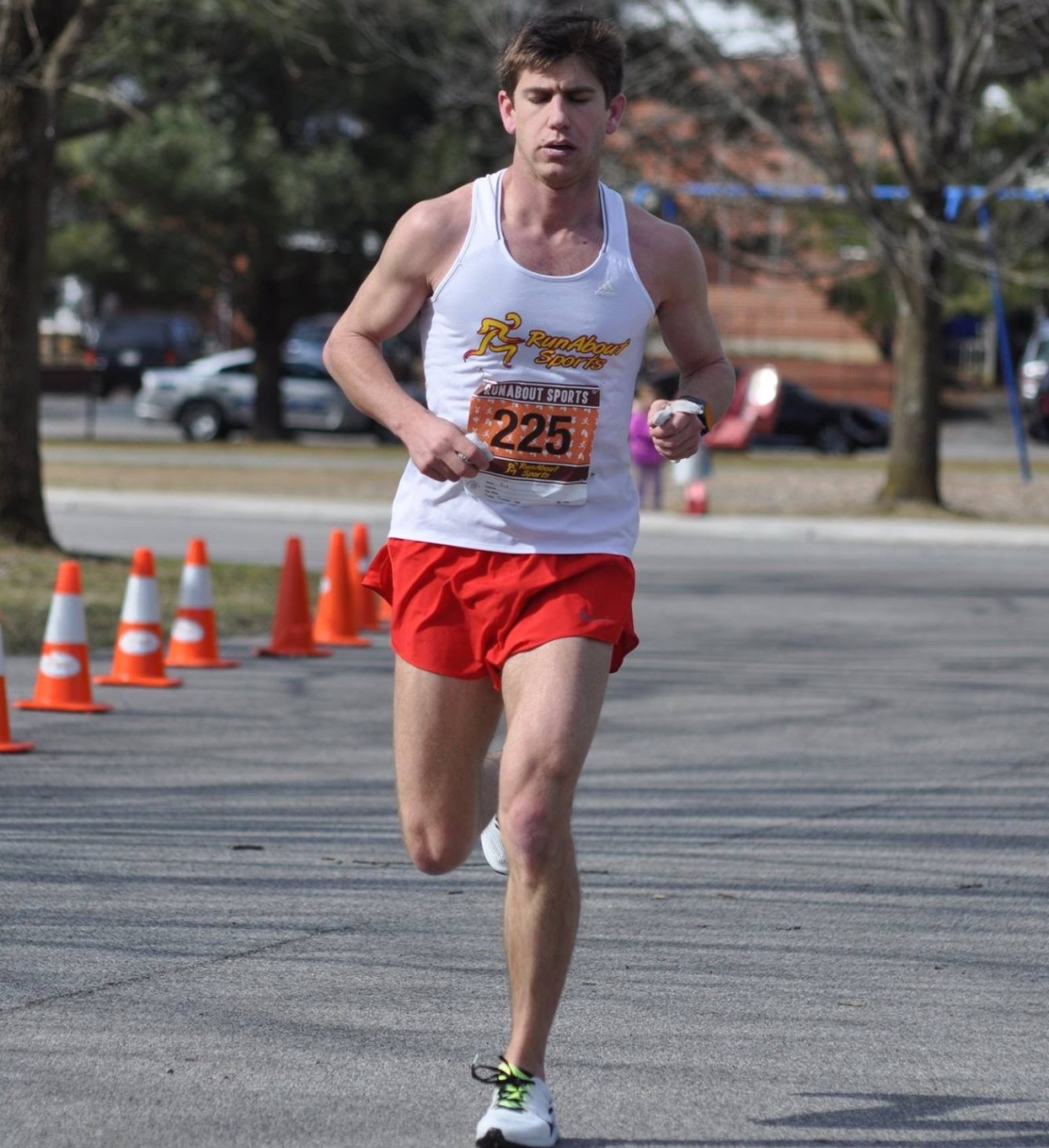